‘Taak dy sock’  was an expression Donna Smith was familiar with whilst growing up. Here she  discusses the origins of some ‘knitting’ words in the Shetland dialect and how they are still very much in use today. 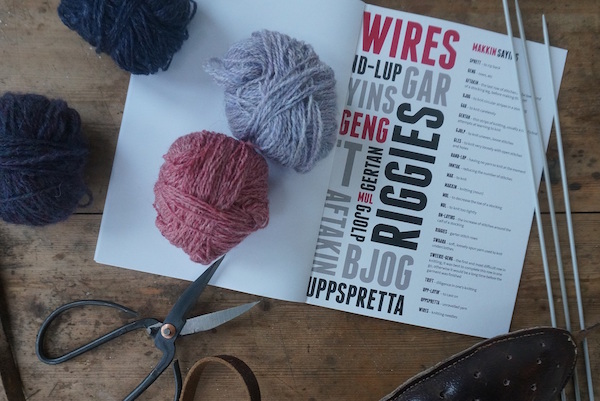 Those of you who have attended classes or events at Shetland Wool Week and are not familiar with the Shetland dialect might notice that there are many different words we use in Shetland and interestingly many of them involve knitting.  Often for a local teacher, it can be tricky to try to ‘translate’ the words or words to be used, particularly when nervous (I am speaking from experience here!).

Many of the words and terminology used to generally speak about knitting are dialect words, for example, we speak about laying up loops (casting on stitches), wires (needles), wirsit (wool yarn), dressing (blocking), we call our knitting “makkin” and the the verb “knit” is “mak”.

The origin of the Shetland dialect, as any language is, is complicated and defined by the history of the place, its ownership, and the people living in and visiting the islands, amongst other things.  The Shetland dialect is largely a mixture of English, Lowland Scots and Norn, which is a variation of Scandinavian languages. Norn is now extinct but used to be spoken in Shetland from around the 9th century until it eventually was largely superseded by the Scots language in the 18th century and became no longer a distinct language.

A large number of distinct words are still found within the Shetland dialect today, many of the words are used to describe things that were a large part of day-to-day life such as the weather, crofting, fishing and knitting.  For example according to Jakob Jakobsen, who extensively studied the Norn language and in turn compiled the Etymological Dictionary of the Norn Language in Shetland in the 19th Century, the word “makkin”, the Shetland dialect word for knitting, comes from the Norn verb “makk” a which is defined by Jakobsen as “to knit woollen yarn”.

Other common words you might hear Shetlanders use include:

Sprett = to rip back or the newly coined term “frog”, this comes from the old Norse “spretta”, and in Shetland dialect the unravelled yarn is the “uppspretta”

Sweerie geng = the first row in knitting.  This is often thought to be the most difficult one and so it is best to complete it in one go, otherwise it would be a long time before the garment is finished.

Interestingly, many dialect words are only used in certain places within Shetland, and I still often hear words I have never come across, many by the older generation.  I love finding new words but I often have trouble remembering them; I must learn to write them down!  A collection of words were made before Shetland Wool Week last year and printed inside the notebooks that were for sale. I hadn’t actually come across many of those words so it’s really important to compile them and write them down while we can.  Like the knitting heritage, the dialect is something we need to make sure we preserve.

A phrase I used to hear my Granny say to us was “Taak dy sock and hadd dee oot a lenger” which was an invitation to come along with your knitting, basically it means take your knitting to prevent boredom.  So, if you have your knitting you won’t get bored – sounds right to me!